Kalah is an aerialist from San Antonio, Texas. She started her aerial training in aerial silks in 2012 under multiple instructors across the country. In 2015 she started competing professionally and in 2016 placed 2nd in professional aerial silks at the Capitol of Texas Aerial Champoionships (CoTAC). In 2016 she had her aerial moon fabricated and went in to take first place in open aerials for her moon performance at CoTAC 2017 in Austin Texas. Kalah specializes in Aerial Silks, Aerial Moon, and Mini lyra. 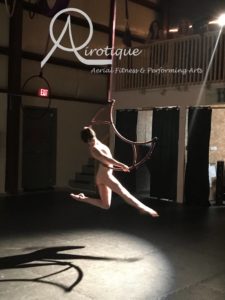